Money bill, how it passed, its procedure, a complete knowledge regarding Money Bill. 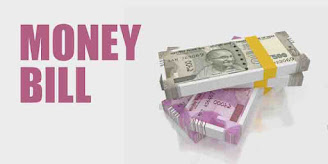 Money Bills: A Bill is said to be a Money Bill if it only contains provisions related to taxation, borrowing of money by the government, expenditure from or receipt to the Consolidated fund of India. Bills that only contain provisions that are incidental to these matters would also be regarded as Money Bills.

Who decides if a Bill is a Money Bill? The Speaker certifies a Bill as a Money Bill, and the Speaker’s decision is final. Also, the Constitution states that parliamentary proceedings as well as officers responsible for the conduct of business (such as the Speaker) may not bequestioned by any Court.

Assent to Money Bills:  Lok Sabha Secretariat is responsible for obtaining assent of all Money Bills after they have been passed or are deemed to have been passed by the Houses of Parliament.  The President may either give or withhold assent to a Money Bill. Under the Constitution, a Money Bill cannot be returned to the House by the President for reconsideration. [Money Bills are governed by 3 articles 108, 109, 110, 111 and 117 of the Constitution and Rules 72, 96, 103 to 108 of the Rules of Procedure and Conduct of Business in Lok Sabha.

In the second category are those Bills which inter-alia contain provisions which would on enactment involve expenditure from the Consolidated Fund of India. Such Bills are categorised as Financial Bills under article 117 (3) of the Constitution. Such Bills can be introduced in either House of Parliament. However, recommendation of the President is essential for consideration of these Bills by either House and unless such recommendation is received, neither House can pass the Bill.