Pending of cases: How much cases are pending in courts......A complete information.

0 Legal Information 4:37 AM
A+ A-
Print Email
in India people usually avoid litigation. it is a common thinking that cases takes several years even some times it takes decades too.
So in this blog we are going to discuss a complete information regarding pendency of cases in all the courts in Indian Court.
Among the High Courts, pendency in Allahabad is the longest and Sikkim has the shortest pendency of cases. These are simple averages — so while they indicate length of delays, at least 50% of total number of cases are pending for longer. A huge majority of cases have been pending for 10-15 years. The break-up of pendency in 5-year brackets helps understand ageing of cases, and can form the basis for prioritising hearings. 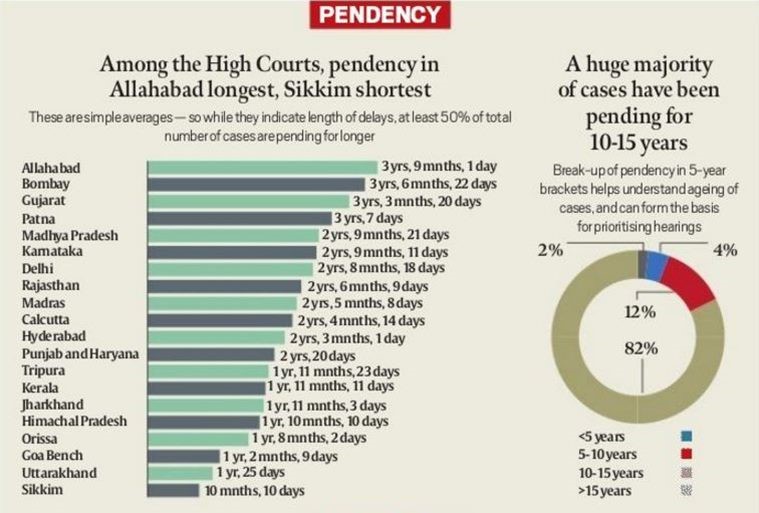 Case types: The survey shows that Jharkhand is the only High Court with more criminal cases than civil cases. The categorisation of cases pending in High Courts are made on the basis of their most pendency of cases.

Like judges, litigants and lawyers too have to deal with multiple hearings, in both HCs and lower judiciary. Among the five subordinate courts with the highest number of hearings per case, the court of the Chief Judicial Magistrate, Howrah, leads, followed by Nagpur and Durg.

Justice delivery system is one of most concerning subject.  People are getting justice after waiting of years, even after decades and some times after their death their legal heirs are getting justice. overhauling of Indian Judicial System is must.
Regarding the overhauling of judiciary some effective steps have to be taken like as appointment of judges, their working hours to be increased, holidays to be curtailed, fixing minimum target, etc.
Posted by legal eagle
Share to: