Only one page form for all the govt services. 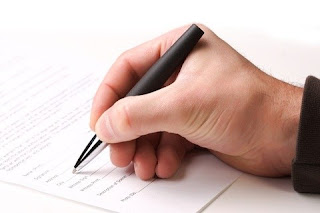 NEW DELHI: Citizens can avail of various government schemes and services such as issue of birth and death certificates by filling up simplified forms that may be compressed to a single-page format within the next one year.
Announcing the initiative on 'Good Governance Day', observed by the Modi government to mark former Prime Minister Atal Bihar Vajpayee's birthday, minister of state for personnel Jitendra Singh said the government, as part of its effort to make the service delivery mechanism citizen-centric, would be talking to and guiding all government departments/ministries to make their procedures and forms for accessing citizens services, less cumbersome.
"Today when a beneficiary has to access government schemes, he/she has to fill up lengthy, often complicated forms and give a lot of information repeatedly. There is a need to have a critical look at the current procedures and forms in use in various departments and ministries in the government. There is a need to eliminate layers of decision making for adding speed to the disposal mechanism. There is a need to specify one page forms seeking essential information for upholding the dignity of our citizens," Singh told a press conference here on Friday.
Secretary (personnel) Sanjay Kothari said some of the forms that could be made simpler are those for issue of birth certificate and death certificate. DoPT, he said, has introduced simpler forms for Central pensioners and those availing of disability pension and other services. "National Centre for Good Governance, which comes under DoPT, will be holding workshops under its initiative 'Saral Avedan, Sugam Prakriya, Swachh Prashasan' with at least two government departments every month to discuss simpler, preferably single-page forms. We have already held workshops with the rural development ministry, DIPP and some labour ministry deptts, in this regard," he said.