Death Punishment: Is it necessary in India ? 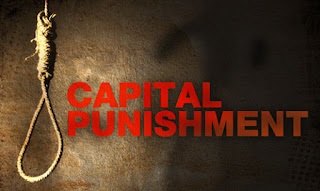 India is the land where people like Gautam Budha, Mahavir Jain, Mahatma Gandhi are born,  Mother Teresa lived. Its a place from where peace and non-violence was spread to the world. in such country provision for death penalty appears to be harsh and unacceptable. But at the same time people are involved in rape cases, murdering human being for their business profits and loss, taking revenge in trivial issues, dacoity, robbery, and for lust involved in  wagering war against the Nation so in these circumstances it is the demand of time that such type of culprits must be awarded capital punishment.

capital punishment is a factor which prevents humans from committing heinous crimes by fear of law and punishment. As a result, it arouses a sense of fear of death among the other people who are even contemplating the crime. Death penalty is a strong deterrent, as it discourages criminals for committing crimes.

Categories of Offenders Excluded From the Death Penalty:

Clemency in the Indian Constitution

After the award of the death sentence by a sessions court,the sentence must be confirmed by a High Court to make it final. Once confirmed, the condemned convict has the option of appealing to the Supreme Court. If this is not possible, or if the Supreme Court turns down the appeal or refuses to hear the petition, the condemned person can submit a ‘mercy petition’ to the President of India and the Governor of the State

Power of the President

The execution of death sentence in India is carried out by two modes, namely hanging by the neck till death and being executed by firing squad.

About 26 mercy petitions are pending before the president, some of them from 1992. These include those of Khalistan Liberation Force terrorist Davinder Singh Bhullar, the cases of slain forest brigand Veerappan's four associates—Simon, Gnanprakasham, Meesekar Madaiah and Bilvendran—for killing 21 policemen in 1993; and one Praveen Kumar for killing four members of his family in Mangalore in 1994.[19] On 27 April 1995, Auto Shankar was hanged in Salem, Tamil Nadu.
At least 100 people in 2007, 40 in 2006, 77 in 2005, 23 in 2002, and 33 in 2001 were sentenced to death (but not executed), according to Amnesty International figures. No official statistics of those sentenced to death have been released.
Afzal Guru was convicted of conspiracy in connection with the 2001 Indian Parliament attack and was sentenced to death. The Supreme Court of India upheld the sentence, ruling that the attack "shocked the conscience of the society at large." Afzal was scheduled to be executed on 20 October 2006, but the sentence was stayed. Guru was hanged on 9 February 2013 at Delhi's Tihar Jail
On 3 May 2010, a Mumbai Special Court convicted Ajmal Kasab of murder, waging war on India, possessing explosives, and other charges. On 6 May 2010, the same trial court sentenced him to death on four counts and to a life sentence on five other counts. Kasab was sentenced to death for attacking Mumbai and killing 166 people on 26 November 2008 along with nine Pakistani terrorists. He was found guilty of 80 offences, including waging war against the nation, which is punishable by the death penalty.Kasab's death sentence was upheld by the Bombay High Court on 21 February 2011 and by the Supreme Court on 29 August 2012. His mercy plea was rejected by the president on 5 November and the same was communicated to him on 12 November. On 21 November 2012, Kasab was hanged in the Yerwada Central Jail in Pune.
NCRB Statistics
The National Crime Records Bureau (NCRB) is an Indian government agency, created in 1986, responsible for collecting and analysing crime data as defined by the Indian Penal Code (IPC). The NCRB has documented death penalties and executions in India since 1995, as part of its prison statistics. There are no collated figures available for executions before 1995.
According to the NCRB, 21 people have been executed in India since 1995. In the decade between 2001 and 2011, 1,455 convicts or an average of 132.27 convicts per year were given the death penalty. During the same period, sentences for 4,060 convicts were commuted from death penalty to life imprisonment. The NCRB does not clarify whether these figures refer to sentences passed by a trial court or those whose sentences have been upheld by a High Court or the Supreme Court, or those whose mercy petitions are pending or have been rejected.