All About Consumer Forum You Should Know!!

1 Consumer Forum, General Awareness 9:28 PM
A+ A-
Print Email
Consumer Forum is the special purpose court, that deals with cases regarding consumer disputes and grievances. These are judiciary set ups by the government to protect the consumer rights. Its main function is to maintain the fair practices by the sellers towards consumers. 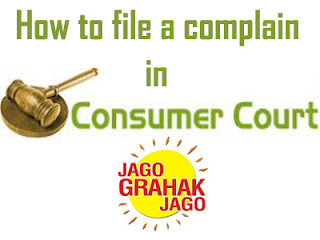 which type of cases can be filed ?


Consumers can file a case against a seller if they are harassed or exploited by sellers. The court will only give a verdict in favour of the consumers/customers if they have proof of exploitation, i.e., bills or other documents.

who can file case in consumer forum ?
Any person who can be termed as a consumer under the Act can make a complaint. The following are the persons who can file a complaint under the Act : a consumer; or any voluntary consumer association registered under the Companies Act, 1956 or under any other law for the time being in force, or the Central Government or any State Government, one or more consumers, where there are numerous consumers having the same interest.

XYZ Co. Pvt. Ltd.                            ... Opposite Party
b.A heading -- e.g. ‘Complaint under Section 12(a) of the Consumer Protection Act’.
c.The name, description and address of the complainant.
d.The name, description and address of the opposite party or parties as the case may be, so far as they can be ascertained.
e.The facts relating to the complaint and when and where it arose.
f.How the opposite parties are liable to be proceeded against - why are they answerable or accountable to you in relation to the complaint
g.Copies of documents in support of the allegation contained in the complaint, complainants are advised to keep copies of the complaint and all furnished documents for their records.  A list of documents should also be furnished along with the complaint, duly signed by you.
h.In case you want to claim consequential damages due to negligence please                    note that negligence or deficiency must be clearly alleged, defined and established to get compensation under Consumer Protection Act.
i.Compensation may also be sought on account of consequential damages, irrespective of the fine print in many contracts that may suggest that the seller is not responsible. There is no ceiling on compensation claimed.
n.You are also entitled to claim the costs of your complaint from the opposite   party.  Hence include that amount in your complaint.
o.The limitation period for filing complaint is two years from the date of the cause of action. In case the limitation period expires, the Forum or Commission may still take your complaint on board, if they are convinced about the reasonableness of the cause for the delay. However, do avoid delays, since you will be required to provide explanations for every single day.
7.Consumers facing the same problem can come together and file a single complaint.  Enclosing a petition with the complaint stating that the facts and circumstances relating to the complaint and the relief claimed are the same for all the petitioners and that they may be allowed to join together and file a single complaint.
8.Complainants who appear in person often are asked to present an affidavit of proof when there is no recorded evidence on a point of fact.  This affidavit of proof must be in first person and should contain the details given in the format enclosed.
Posted by legal eagle
Share to: